The West Coast Fossil Park (WCFP) is a National Heritage Site and a public access palaeo-tourism venture situated in a rehabilitated phosphate mining area covering 716 ha. The site is located near Langebaan, about 120 km from Cape Town. Scientifically, the WCFP represents possibly the greatest diversity of fossils found anywhere in the world dated to the Miocene/Pliocene transition (about 5.2 million years ago). It is also one of the very few sites in Africa where actual fossil remains can be viewed in situ, and is ranked amongst the best education and palaeo-tourism destinations in the world.

In 1976 Brett Hendey excavated 4 trenches (1mx4m) into the 0.5 metre-thick bonebed in the floor of the Langebaanweg phosphate mine and in doing so recovered at least 1 million specimens that form the bulk of the Cainozoic collections at Iziko South African Museum. He interpreted the bonebed as having accumulated within a flood channel along the northern bank of the former Berg River estuary. He noted that the fossils were concentrated on the side and downstream of a phosphate rock outcrop and proposed that this rock had obstructed the flow causing the bones to accumulate (Hendey 1982). From 1998-2007 Roger Smith’s research team tested this hypothesis with sedimentological and taphonomic analyses of 75 m2 of carefully exhumed bonebed. Visiting the exposed bonebed now forms the core experience at the West Coast Fossil Park.

Most of the bones remaining in the dig site belong to sub adult sivatheres. There is however a skewed distribution toward post-cranial elements, especially ribs and vertebrae. Skull roofs (with horn cores) are under-represented in the sampled portion of the bone bed. There is a strong indication from the spatial distribution of the larger bones that the phosphate rock outcrop at the southern end of the dig had an influence on the accumulation and the burial of several sivathere skeletons. Bone "trains" that appear to originate from individual skeletons indicate a style of disarticulation and dispersal that is mainly governed by gravity rather than hydraulic sorting. Bone damage patterns show numerous long bones with point compression fractures and arcuate "greenstick" breaks interpreted as the result of trampling by hoofed animals during and immediately after burial whilst the sediment was still unconsolidated. Scratch marks on some of the bones are consistent with trampling rather than scavenging although there are rare indications of paired puncture marks that are most likely made by hyena-sized carnivores.

It is concluded that Hendey’s hypothesis for the bone bed environment of an intermittent fluvial channel in an estuarine setting is basically correct but it is evident that not all the animals arrived at the site during flood events. It is most likely that the scour pool provided a waterhole for herds of savanna animals and an aquatic microhabitat habitat for frogs and fishes. Other micro-vertebrate concentrations, in particular golden moles, were added directly to the scour pool probably from regurgitates of owls and other raptors that used the rock as a perch. The fact that sivatheres are over- represented possibly reflects they were gregarious and susceptible to mass drowning episodes similar to migrating Wildebees crossing the East African Mara river today.

For more information please contact the geological Society via geolsocnamibia@gmail.com 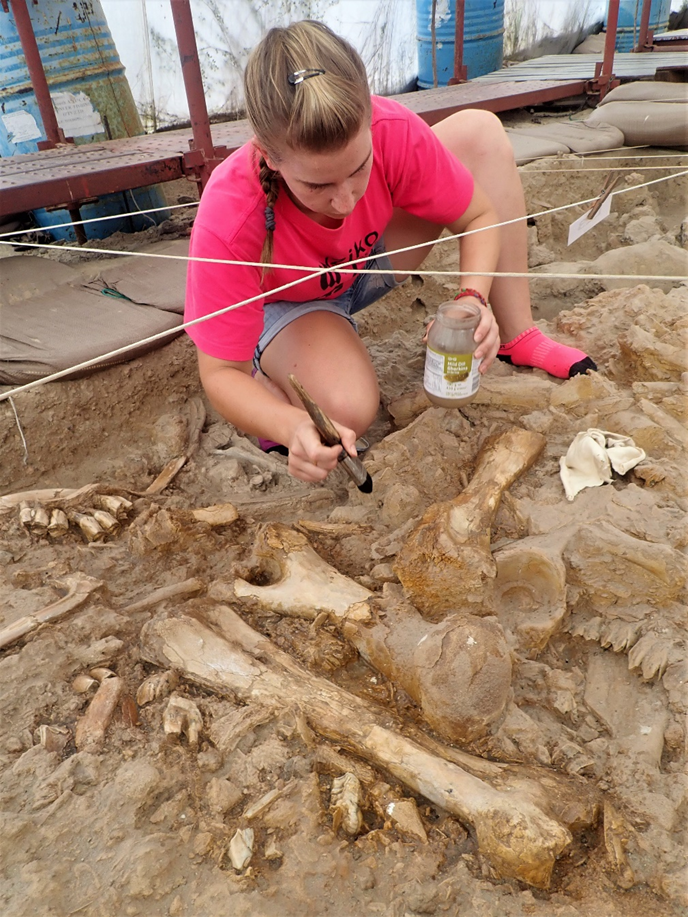 The late Paleozoic glaciation and its paleofjords in northwestern Namibia

The late Paleozoic glaciation and its paleofjords in northwestern Namibia

The Kunene Region in northwestern Namibia hosts an outstanding and relatively untouched deep-time glacial landscape. Major modern rivers flow through an exhumed network of U-shaped glacial valleys carved on bedrock by Gondwanan glaciers and filled with the glaciomarine Dwyka Group and post-glacial sediments during the late Paleozoic Ice Age (362-256 Ma). This paleofjord network in Namibia has provided evidence to support the hypothesis of an ice sheet placed in southern Africa feeding outlet glaciers into the eastern margin of the Paraná Basin seaway in South America. Despite these fjords being widely considered in regional paleogeographic reconstructions, their sedimentary fill and glacial dynamics are poorly known. Detailed field-based investigation linked with satellite and drone imagery in the Namibian fjord network are allowing new outcomes regarding this paleolandscape of glacial erosion, the nature of the glacial and post-glacial stratigraphic record, and the significance of gravitational resedimentation in fjord depositional systems.

For more information please contact the geological Society via geolsocnamibia@gmail.com